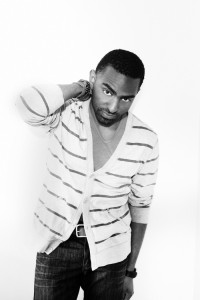 Darnell Levine has taken the genre and destoryed it! A strong blend of melody-driven jazz, lyrics of experience, a vocal a capella combined with dynamic performances, has quickly given Levine a reputation throughout the Southeast as one of the next musical geniuses of his time. With a fresh sound void of the today’s recycled trends, he brings good music to your front door.

“Some call it soul, some call it jazz, some call it inspirational, but it’s just good music. I just write songs I’d want to hear at least once a day,” says Levine.

Sharing stages with artists such as multiple Grammy award-winner John Legend, Eric Roberson, and Bobby Blue Bland, Levine was featured in All The Rage as one of Nashville’s new faces of music. Levine first gained his word-of-mouth following at Nashville’s Lovenoise, the premier venue for artistic expression, which birth his first release Vocal Sessions EP. Almost two years later, he has returned to the studio to record his debut release “We Gon’ Use What We Got.”

“[Darnell is] an artist with a refreshing sound, who’s not afraid to take creative chances,” – Grammy Award-winning member of Take 6 Cedric Dent.

A Louisville, KY native, his parents introduced him to such artists as The Bee Gees, Take 6, and Sam Cooke at an early age and music instantly became his first love. He soon began percussion lessons in school and taught himself to play the piano, using the influences of his parent’s music and his schooling to begin exploring his own voice.

As his passion for music grew in college, Levine and friends cultured their gifts through the creation of miCheck (pronounced mike-check), an open mic experience for everyday students and musicians. While there he was influenced by the hot and sweet sounds of jazz and the newly popular neo-soul movement. Equipped with this background, Levine was ready to write his own words and play his own music.

That music is fully captured on debut album “We Gon’ Use What We Got”, with 15 tracks that are sure to fulfill the demand for Levine’s voice. Songs like “First Impressions” and “Table 42″ showcase Levine’s God-given storytelling abilities and his quest to balance sensitivity and humor without error.

He humbly grins saying, “I hope this record makes people tap their stirring wheels to good music again. I want people to sing along and feel good when they listen to this album from beginning to end. This is my first impression…”