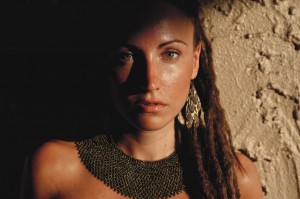 South African born singer/songwriter Laura Reed has steadily been making a name for herself, captivating audiences and ears globally with her soulful vocals, vulnerable songwriting, and electric live performances. Laura is known for her genuine ability to take the struggles and heart- ache we all share, and crafting them into catchy and positive anthems. It is this type of songwriting and experience that helped her to conceive ‘Faith not Fear’, the first single off her upcoming album, The Awakening.

‘Faith Not Fear’ is a vocal offering with a vibrant message about overcoming the test and trials that all of humanity faces, but sometimes needs the encouragement to overcome. A song that Laura defines as “a kind of marching band anthem with a beat box tempo”, co-written and produced by the 2X Grammy- award winning songwriter/producer SHANNON SANDERS (India.Arie/John Legend/Pink). Shannon is also the producer for her upcoming LP and musical director.

“Laura has a rare combination of gifts-musical and spiritual, “states Sanders. “She reminds me that real music and real people still exist.”

As fore-mentioned, Laura had been cutting her teeth as a performer, previously known as the front person for the now defunct Laura Reed and Deep Pocket. Laura’s authentic “slow-cooked soul music recipe” is reminiscent of iconic music trendsetters like Erykah Badu, Lauryn Hill and the late Amy Winehouse.

Since the age of 16, Laura’s music has been seasoned by influences from her background work and global travels (15 countries and three languages thus far); her delivery has hints of Samba, Reggae and African beats.

Laura cites music as, “my first Love and expression, a Universal language that we all speak. I hope others are able to find healing and enjoyment from the experiences and insights expressed in my music.”

Laura’s musical resume and mentorship is impressive, filled with a wide range of artists and genres including George Clinton, Ike Stubblefield, Jewel, Karl Denson, and even a chance encounter with Whitney Houston who pulled Laura aside while they were both in the studio to remind her that no matter what “never stop singing”.

Laura currently resides in Nashville Tennessee, where she was beaconed by mentor, former music executive and Grammy award winning producer, Paul Worley. It was Paul who introduced Laura to Shannon Sanders, and encouraged her to come and hone her talents as an artist and songwriter in Music City.

“I don’t really have words to express how much I love Laura’s music,” says Worley. “It’s real, it’s authentic, it’s what the world needs.”

Laura’s new single ‘Faith not Fear’ was inspired by this journey and is now available online and accompanied by her first music video (directed by Alexander King). Laura is back on the stage performing and plans to release The Awakening Fall of 2012.  For tour dates and info visit www.laurareed.com