#SoulMusicLives EP will be produced by the one and only SHANNON SANDERS! 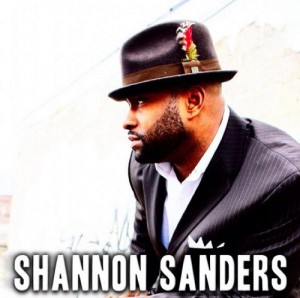 Gifted with the ability to entertain while driven by a desire to enlighten, 2x Grammy-winning producer, singer and songwriter SHANNON SANDERS has always had a passion for the stage. As an independent artist (“Outta Nowhere” 1999), as musical director for India.Arie for over a decade, and as a part of the creative force along with partner, Drew Ramsey, SHANNON is behind chart-topping artists including India.Arie (Grammy), Jonny Lang (Grammy), Robert Randolph & the Family Band (Emmy), Nicole C. Mullen (Dove), John Legend, Anthony David, Eric Benet and Marc Broussard just to name a few. As the originator of the 2006 R&B Billboard favorite, “In My Mind” (Heather Headley), this song displays SHANNON’S uncanny ability to translate issues surrounding the matters of the heart for both men and women—both as a vocalist and a producer.

Making music that moves, motivates and matters has afforded Shannon the opportunity to tour various platforms and venues including New York City’s Madison Square Garden and the Apollo Theatre, London’s O2 Shepherd’s Bush Empire. LA’s Hollywood Bowl, Nashville’s Ryman Auditorium and the Taste of Chicago. His musical gifts have also afforded him various television appearances from Good Morning America and Saturday Night Live to the nighttime talk show circuit including The Tonight Show with Jay Leno, The Late Show with David Letterman and Conan. The spotlight is now shining squarely on SHANNON—an NAACP Image Award nominee and the 2008 SEA Award winner for R&B Artist of the Year. As a solo artist, he is preparing to release his second project, the Grown Man Handbook(GMH). This neo-blues single series is an inspired collage of life lessons, insights and autobiographical resolves set to music—soulful, authentic, rural, profound, necessary...timely music. For GMH, the message and mission are one in the same: How MANdatory it is for men to be responsible with their power; for them to understand that it has the undeniable ability to either build or to destroy—their families, their communities…themselves.

How SHANNON is able to compile such a complete offering on one project speaks to his inspiring talent and wonderfully vast and unique perspective on the world through the eyes of MANkind. Whether the single is “It Ain’t Easy”—a male’s take on the daily challenges of making a relationship work; “Southside Blues (These Streets Keep Calling Me)”—a mantra for men about the power of finding and living out one’s purpose, or “Man Up”—a call to action for men to prepare boys for manhood, if there is one thing that the Grown Man Handbookis guaranteed to provide, both for men and the women that love them, is clarity. Clarity on how to live..how to love. Better.